I lay in bed hearing the alarm going off across the room. I hear my husband roll over and the familiar loud click as he’s snoozed it for himself. And he grumbles, “Go run,” bluntly and matter of fact. He’s not a morning person. Neither am I. I lay there for awhile longer knowing a few things…..it’s 6:30am and our youngest is in the bed between us. He crawls in there every night despite all of the things we’ve tried. Our oldest is out in the living room playing, chipper, excited that tomorrow is his first day of Kindergarten. And I’m laying in bed on the morning of my last long morning run for awhile.

So, I roll out of bed and start to gather my stuff…..

I eventually make it out the door after trying to go to the bathroom more than once. I’m always unsuccessful at this and I’m still baffled as to how people are able to accomplish this and not have to walk during their runs, turn back at some point, or just suffer through with a squeezed behind. But I set out any way because the morning is actually cooler than it has been. Fall is coming and I’m so excited and ready for it!

Tomorrow, when my big guy starts Kindergarten, our morning routine changes for good and I won’t be able to do long morning runs until it cools off and I have the time after he’s dropped off. Even then I will be back to pushing the 3yo in the jogging stroller and that is almost like starting from scratch in training. So, I chose to do my 4.5 mile course and see what I could accomplish. I last ran it on Wednesday and had to walk a good chunk. Today felt different, like I would make the whole run.

I didn’t and had to walk for almost half a mile in the middle. Despite the mental pep talk I was giving myself, my body wouldn’t get on board with the distance and I decided to let it rest a bit before pressing on. I had done the turn around in 21 flat, ran on to 3.25 in 30:43, walked .48 in 7:02, and finished the last .78 in 7:06. As I ran I considered some women who motivated me to get out of bed this morning.

5. Any woman who is still running after 3 women have been murdered while out running because this isn’t the era to go backward from Title 9 and give up and hide indoors, but keep yourself safe ladies!

Why I’m Still Running Alone at 5 AM. 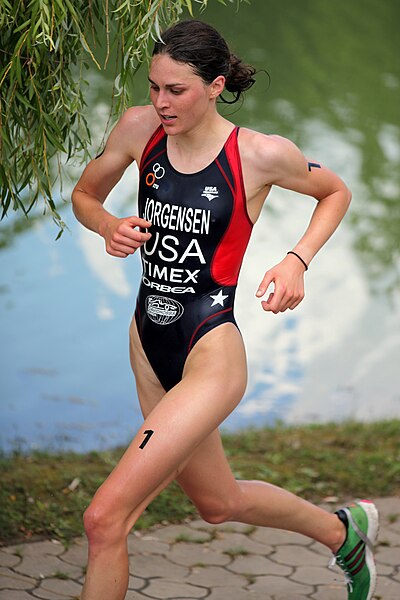 4. Gwen Jorgensen because she kind of just started as a triathlete and she’s kicking butt and taking names. I miss triathlon and I commend her achievements!

3. Caitlin, because she’s also killing it at triathlon training, but being honest and real about how much it sucks sometimes. Yet, she’s got it together and gets out there at it in the insane Florida humidity while I whine about 3 miles in NC.

2. Allyson Felix……what can I say here? Look back to the Olympic trials when she lost her spot in the 200m because Prandini falls to the finish in front of her. http://www.nbcolympics.com/video/allyson-felix-misses-200m-400m-olympic-trials

Then, in the 400m at the Olympics she gets Silver because Shaunae Miller jumps across the line ahead of her. http://edition.cnn.com/2016/08/15/sport/allyson-felix-athletics-olympics/

Finally, she had to fight for her team in the 4x100m relay due to a bump from the Brazilian team that caused a drop of the baton.

They re-ran the race….alone…and scored the fastest qualifying time. They ran and won the finals which helped Felix to become the most decorated female Olympian. She also won gold in the women’s 4x400m. I wish I were able to keep pushing as hard as she has.

1.Me……I got up this morning and that’s inspiration enough. I got up and ran and

I’m motivating myself a little more each day. I went through a strong down time this summer and My Dashboard at MapMyRun reflects that. But I still look up to myself and the work I’ve done. I’m happy with what I’ve done and it will keep getting better.

Who or what motivated you to get up and run today?

This site uses Akismet to reduce spam. Learn how your comment data is processed.

Stories of trail running, cycling, beer and wine tasting in Monterey County and beyond.

Yoga With Adriene
The Busy Budgeter

A balanced life for busy people!

A collaborative, open online space maintained by the graduate students of the Physical Cultural Studies research group at the University of Maryland, College Park. Dedicated to critical discussions of physical culture in all its sociocultural, historical, and everyday material forms. Public ideas/writings welcomed and encouraged.

In Search of My Running Tribe
the pavement project

running for the not so super-human

Ramblings of a girl who runs a lot of miles and drinks a lot of coffee.